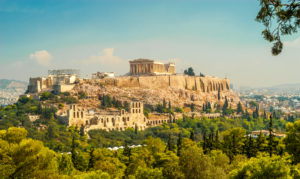 Athens is the capital and largest city of Greece and dominates the Attica region. As one of the oldest European cities, it has been an important commercial center throughout the centuries. Nowadays, the greater metropolitan area includes about 3 million inhabitants.

Thanks to the Piraeus port in its immediate vicinity,  Athens has traditionally been an essential hub for passengers to reach the Greek Islands or other destinations throughout the Mediterranean Sea. The same applies to Athens International Airport, an important destination for about 25 Million travelers.

Korinthos is located in south-central Greece. Located about 78 kilometres west of Athens, Korinthos is surrounded by coastal towns and significant archaeological sites.  The modern municipality of Korinthos has a population of  about 60.000, the second most populous municipality in the Peloponnese Region.

The first round of testing was conducted in the summer of 2019 with 10 participants in Athens. The participants were given various simulated mobility scenarios in Athens, which were solved with the help of the MyOSS app. The whole process took place in a laboratory environment. The collected feedback was very valuable for the improvement of the App, which has been enhanced over the summer months.

In the second pilot round, the real-world tests are taking places in Korinthos. Around 60 participants will test the MyOSS app for functionality and usability over a period of several month. In the real-life test, participants are being asked to use the MyOSS for their daily commutes to work, within Korinthos and to other cities, such as Loutraki and Athens. In order to get the most representative results possible, the participants will be varied, based on gender, age, work, education and social class.

So far, the biggest challenge in the whole process is the integration of big number mobility services in order to provide an attractive and ideally all-encompassing offer so that the users can take real advantage of the usage of the MyOSS App.

Amsterdam
Prague
Rome
Salzburg
We use cookies to ensure that we give you the best experience on our website. If you continue to use this site we will assume that you are happy with it.Ok